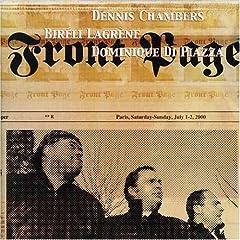 This is the story of a close encounter of the third kind (in theory, very close, and musically, it's highly original) : guitarist Biréli Lagrène inviting bassist Dominique Di Piazza and drummer Dennis Chambers to come and play with him… both were musicians who'd been in rhythm sections for ages, but in many contexts - the Southerner and the American stamped the Eighties with their sound - whereas Django's descendant didn't come into view until the turn of the following decade. But there the difference ends : all three have a musical inventiveness that any leader could count on for support, and each of them has in fact enough talent in his fingers to lead his own band… Hence the "Front Page" of the title, a page with a triple header, and a triple understanding to go with it. The stakes here have nothing to do with their names as individuals, because all the playing is based on the sound of the whole unit. This is what brings union to the ensemble, a unity of elements that are complementary, not contrary.

Yes, all three are eclectic and electric virtuosos who wield as much talent in their finesse of touch as they produce speed in their dexterity, and yet all three are capable of both rejoicing and sadness. Yes, they represent three separate traditions, from American funk to gypsy jazz, traditions that collide, without confusion, in explosive, detonating union. Yes, these three musicians did have a lot to do with (and learn from) John McLaughlin - incidentally he's a guest here, the time it takes to play a brilliant "Joseph" - and it's a fact that their sound as a rhythm section also took on further shape alongside the British guitarist (and the young, former 6-string prodigy listened a great deal to his illustrious elder). All effects have a cause. Yes, these three are familiar with the trio format, with which they've experimented more than once in the jazz world. It's a format where they learned to listen, breathe, and inspire one another. The trio format is one that teaches players to hear each other, and not play as soloists, but rather gain new impetus from each turn of improvisation, each stroke of inspiration. These players in the format have geometry - they're a triangle whose three summits play straight and square, but in circular fashion, tracing lines of escape beyond the patterns constructed on the score.

It's no coincidence that the themes chosen testify to an eclecticism that's both explosive and brilliant - these are compositions that tell stories, the lives and desires of each of them, by turns tinted with a zest of swing guitar, a line of bass funk, and a sudden, swaying percussive burst. With nimble fingers and a refined ear, the heart of "Front Page" breathes jazz that is plural, from restrained ballads to unbridled outbursts. Labels waltz, hips shake, they pause without posing… the bass walks on alone, the tempo's right, the guitar hits a shot from a sensitive string, the drums sway without the hint of a swagger… the paths they could take here are multiple, and always a pretext for building playgrounds far from the beaten track. There's joy at full tilt, carefree and devil-may-care at just the right speed, and then just the right notes come in, a waterfall that dies away into a less exuberant phrase where each takes his own time, with sweet arpeggios slipping over chords. The trio even multiplies figures of style, playing solo or duets, no matter, for each has a voice to be heard.

If this was a race, even with your head spinning at the finish, you could put money on any combination of the three and still have a winner.